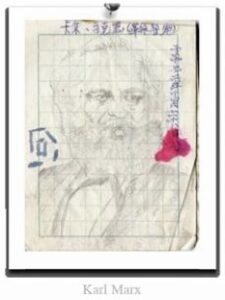 This is Tanya’s history course project, researching an influntial thinker and then making a presentation in the form of addressing the world with his ideas.  Tanya chose the communist god-father Karl Marx, who she thinks is an intriguing figure with a great dream but failed in the practice.

(1) Meeting of the Minds: Karl Marx

(Tanya was dressed like an old scholar wearing a grey wig and white thick beard just like Marx and made the following speech passionately, with the ending sentence first in German and then repeated in English, word by word, very powerful.  The teacher was impressed and gave her an A.)

Hi, I’m Karl Marx, a middle class, 18th century German scholar, who was born at the beginning of the Industrial Revolution, when Capitalism was just starting and not yet mature. There were no social welfare programs (such as healthcare or pension) or worker unions, and everything was a class struggle between the rich, Bourgeoisie, and the working class, Proletarians. My theory, Marxism, is about the ultimate government, Communism, in which the property of a society is owned by all members, and peoples’ talents are utilized to their full potential, so that people enjoy their work while working toward the common good. Capitalism is a corrupted system in which the Bourgeoisie have all the power and exploit the Proletarians, while the Proletarians are unfairly treated, wage-earning robots. Even in democracy, when people vote, they are affected by mass media, controlled by the Bourgeoisie. All humans are naturally creative and talented. So I say to you all, everyone is equal. We should overthrow the dictatorship of the Bourgeoisie, “Proletarier aller Länder vereinigt Euch!” Proletarians of the world, unite!

(2) The U.S. is a land of free speech.  Despite the bad association with communism in the media, Tanya shows keen interest in Karl Marx and his theory of communism.  The other day when she got up, Tanya told me, “Dad, I had a weird dream.  The last sentence I remember saying to somebody is: If there is anything that I know, communism is for you.”

Looks like she really got intrigued by communism during the study of World History.  This was quite a surprise to me, as we have seen and experienced too much of “communism”.  Tanya told me that kids in America had been brain-washed to believe communism is evil, leading to dictatorship, but after research, she now realizes that communism is a very nice dream of mankind, perhaps too nice to be practical.

“we were brain-washed to believe that communism is associated with dictatorship and leads to evil. But according to Marx, communism is a beautiful society, no class. no class struggle, work is fun and not a burden, one can satisfy his most potential with his gifted talents.  But why the countries experimenting with communism all failed?

“They failed for a good reason.  The reason is clearly stated in Marx’s works but the followers did not take it seriously.  That is, an ideal society like communist needs to be supported by the maximum productivity.”

Tanya continued, “Marx is a great man, and capitalism sucks.  Look at the financial storms in recent years that spread from US now to Europe, all the signs show that capitalism is doomed and communism will most likely conquor the world, if made practical. “

She smiled, “Dad, by now, I think I am already a communist.  Capitalism sucks, got to be replaced by communism.”

I was really shocked, at the fact that her speech was almost identical to my thinking when I was her age.  It took us years to get out of it.  Nevertheless, I still like the fact that free thinking and speech enable Tanya to research and understand the world in her own way and pace.   Like all teanagers, the existing reality is always the worst, the ideas from the other world look so much better and beautiful.

Karl Marx was a German philosopher, sociologist, and communist in the 18th century. He developed a famous theory, called Marxism, that fundamentally influenced the human history. In fact, Karl Marx is among the most quoted scholars in history and is one of the most influential figures of all time. His two most famous works are: The Communist Manifesto published in 1848, mainly a political statement for the communist movement, and Das Capital, a book he devoted his life to on the nature of the capitalist system. In the last century, following his revolutionary theory, there were communist movement and revolutions in many countries to form a communist group of states, led by Soviet Union in 1922 and led to the founding of Red China in 1949. However, since the collapse of Soviet Union towards the end of last century, the communist movement suffered a big retreat and even the post-Mao China turned to market economy, a system closer to the capitalist economy than the communist economy. Marx’s predictions that the global revolutions will end the capitalist system in the world are not proven right.

He regards the capitalist government as an inhuman government which only protects the capitalists (bourgeoisie) while oppressing the working class (proletarians). He believes that despite the name of democracy, a capitalist society is in essence based on Dictatorship of Bourgeoisie. He concludes that capitalist government should be overthrown by the working class and replaced by the socialist government based on Dictatorship of the Proletariat. Eventually socialism transitions to communism when the productivity gets to the highest level. Communism is the ideal society in Marxist theory in which every one enjoys his work, which brings job satisfaction and fulfillment of his creativity, at the same time producing the products to meet the needs of all the society. In communism, there is no distinction of class, no class struggle and everything is in harmony.

Contrary to the popular view that human is selfish by nature, Marx thought that human is a naturally creative animal. Accordingly, an ideal society creates a condition for the whole development of human nature. But capitalism is an evil society which turns humans into wage slaves.

Marx’s theory of human nature plays an important role in his criticism of capitalism and his ideal of communism. A closely related and even more influential theory of Marx is about alienation from human nature caused by the capitalist system.

By alienation, Marx refers to the social separation of people from their “human nature” which is supposed to be decent and creative. Marx believed that alienation is a systematic result of capitalism. He believed that it is the alienation that deformed human nature, making people behave differently depending on one’s social status. The nature of capitalists becomes exploiting and oppressing the working class purely for the seeking of profits. The working class becomes wage-slaves like robots working in inhuman conditions.

Only in the communism can all men gain freedom and be liberated from wage-slavery, enjoying the full nature of their creativity.

5. why he thinks that way

Marxism was formed in an age when the capitalism was not mature and there were waves and waves of class struggle and society conflicts : there were no social programs, no unions and other forms of laws as seen in the modern society. For example, there were no minimum wage law, child labor law, income tax regulations and social welfare to protect the lower working class and to balance the interests between the capitalists and the proletarians. Out of deep compassions for the lower working class who has been struggling for very basic living, and out of the anger towards the early capitalists who were after profits by forcing the working class to work long hours with very low pay and very poor working conditions, Marx concluded that the capitalist government is inhuman and will be overthrown by the proletarians and replaced by the socialist and then communist government.